On 06-10-2008 a case of dacoity was reported from the house of Dr. Dharwade in Basavakalyan town PS limits. The investigation was taken up by CPI Basavakalyan town H.K. Pathan under supervision of S.P. Bidar. Subsequently a case of robbery was reported in Basavakalyan town on 23-10-2008 and a special team was formed headed by CPI  H. K. Pathan to investigate both the offences. During the course of investigation, based on the discription given by the victim and other evidences picked up from the scene of offence, the investigation team picked up a gang belonging to Basavakalyan town this morning. On interrogation the accused Basavaraju aged 23 years, Siddeshwar aged 21 years and Pradeep aged 25 years ( all belonging to Basavakalyan town ) confessed to committing both the above mentioned offences along with two other persons, and in addition they also confessed to having committed another heinous theft under Basavakalyan town PS limits. From the information disclosed by them, 11 tholas of gold, 650 grams of silver, one mobile phone and cash in Rs. 540/- were recovered. Total worth of property recovered is 1,54,530/- .

All the three have been arrested, the other two persons involved in the offences are absconding and are to be arrested. Further investigation is in progress. 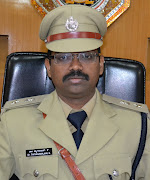